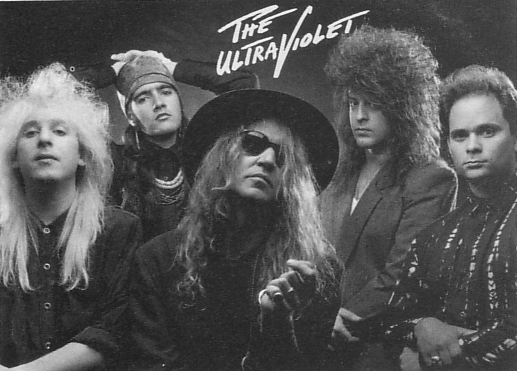 THE ULTRA VIOLET is a Chicago based modem rock’n’roll band, who put out an LP in 1986 titled “Mother Victim”. The band has an image somewhere between GUNS N’ROSES and DEF LEPPARD, but sound just the opposite falling between TOMORROWS CHILD, RAIN ON FIRE and FIFTEEN MINUTES. The bands current line-up reads: Chris Schneider (lead vocals), Angelo Vancheri (drums), Bob Pucci (guitars) and Bob Tyrell
(keyboards).

All their songs show major hit potential, from the vibrant “Shattered World” to the wildly commercial “Sanctuary” and the weirdness of the ballad “Shadows”.

There’s a helluva lot of U2 in there too and a lot of other comparisons too numerous to mention. If any band ever featured in this Demolition section had any chance of any real commercial success, then this is the band.