I’ve got to say that this gig had all the ingredients for turning into a “Fabulous Disaster” itself and considering the trauma’s suffered throughout the day by bands and crew alike, I was very relieved when it had actually got underway.

On arriving mid-afternoon at the Rolling Stone, a seedy but fairly amiable venue close to the centre of Milan, it became apparent that all was not exactly what you would call…er, well. Problem. The truck carrying all the equipment, PA, amps, etc had not yet turned up and as far as I could make out, nobody seemed too sure about its location either. As time drew on faces grew longer and longer, including my own. By now plans were afoot to hire gear locally, an idea not relished by most, but something that looked like becoming a reality and better than not playing at all.

Moving on to the early evening, things were still unchanged and with proceedings meant to commence at 8 o’clock then time was running very short, However, shouts of ‘the truck’s here’ and a general buzz which suddenly spread around the hall, signalled time for a mad panic in order to get the gear in and setup.

And so to NUCLEAR ASSAULT. Well, as I’ve said before, these guys are just so much fun and have some crushing songs that you can’t fail to enjoy. The set featured was a very familiar one featuring all the old faves, one of which I was particularly interested in seeing what sort of reaction the Italian crowd would give it, They must have had a few doubts about playing “Hang The Pope”, but actually it went down surprisingly well, as did the other quickies “My America” and “Lesbians”. NUCLEAR ASSAULT managed to entice the odd stage diver or two and also succeeded in whipping those down the front into a frenzy. With “Butt***k” we got the usual looning around on stage, promptly copied by the crowd out front, but sound wise it was still a bit of a disappointment – but then I haven’t yet seen a NUCLEAR ASSAULT show where l thought that the sound was excellent.

Whatever, it didn’t matter to the crowd and we got some barnstorming versions of songs that have now become like old favourites. what the band lacked in clarity they made up for in pure. raw energy: “F Sharp”. “Game Over”. “Nuclear War”. “Fight To Be Free”, all manic run throughs which gave the cue to go berserk and it looked like NUCLEAR ASSAULT had succeeded in winning the crowd over. “This one goes out to EXODUS,” announced Dan Lilker before the band burst into “Justice”. With a brutal version of “Vengeance” and the quick inclusion of crowd pleaser “Good Times, Bad limes” this was a set that offered few surprises, but gave the Italian crowd just what they’d hoped for, expected and got, so despite the iffy sound I’d have to say NUCLEAR ASSAULT 10, The Pope 0.

After the show I asked guitarist Anthony Bramante whether the band have been at all worried about doing “Hang The Pope”? “At first I was and then I said to hell with it, they wanted it, they asked for it and they got it”

So how do the Italian audiences compare to elsewhere? “This has been our best so far, no bullshit, after we record our next album in May ‘89 maybe we’ll come back. As of now we have about five songs together, it’ll just be as heavy, maybe a little more progressive, with a little more taste and style,”

Have the band suffered because of the equipment hassles’ ‘Well, we did the show even though we didn’t have our road crew here, we still did the best we could do but we’ve only got two guys, no monitor man, no sound man, y’know, but we still did it and got the best response, so it was fun.” 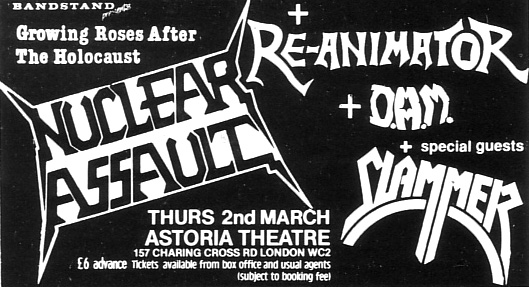