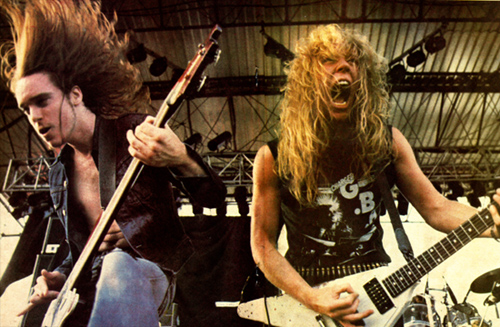 n October of 1981 came the collaboration of Lars Ulrich and James Hetfield in Norwalk, CA (near LA) that today has grown into such a phenomenon they have become cult heroes to the vast hordes of “headbangers” throughout the world known as “Metallica”.

With Ulrich’s powerful drumming and Hetfield’s extraordinary vocals and brilliant rhythm guitar work people took notice right away. The duo were invited to appear on the first “Metal Massacre” album where they recorded the now legendary track “Hit The Lights”. The fact that it was poorly engineered didn’t stop it from reaching the top of the worldwide “Underground” HM Charts.

In February of 1982 Dave Mustaine (lead guitar) and Ron McGovney (bass) joined the group. Immediately the band were put to work opening from Saxon in L.A. They received tremendous press from the L.A. Times. When Krokus cancelled their show (Metallica was to have opened) Metallica was asked to go on and play in front of a mob of angry “headbangers” who had just found out Krokus would not be appearing. That evening became the “Night of Metallica”. They received rave-reviews and were acclaimed to be the Heavy Metal Heroes of L.A. Fans swelled in numbers as they continued to play their “Balls Out” performances at such local clubs as the “Whiskey A Go. Go”, “Troubador”, “Roxy” and “The Country Club”. 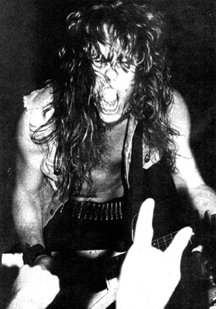 In an attempt to reach even more people Metallica went into the studio to record their “No Life ‘Till Leather” demo. This seven song demo became the widest circulated tape throughout the world via the “Underground Metal Exchange”. Letters from fans came pouring in from all over Europe and the Far East. Songs like “Jump In The Fire” and “Seek and Destroy” had become HM anthems on both sides of the Atlantic.

In November of 1982 the band headed north to San Francisco to do a headliner at Bill Graham’s Old Waldorf. They themselves were surprised to seethe place packed with headbangers who showed an even greater appreciation for the band than the crowds in L.A. After playing the “Stone” twice and a final show at the “Waldorf” they left the Bay Area with much dismay, and returned to L.A. to open for Y&T in a sold out performance at the Orange County Country Club. They had left San Francisco as the most popular band there unsigned to any label and had created a frenzy amongst the “Bay Area Bangers” that even surpassed that of Motorhead and Girlschool. 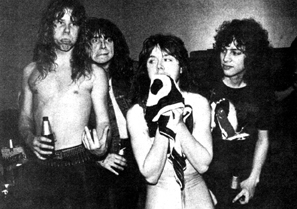 Still striving for perfection they recruited Cliff Burton from Trauma as their new bassist. Burton had already been written up in the press as one of the best bass players in California. Exodus axeman Kirk Hammett was called upon next to replace lead guitarist Dave Mustaine. Ulrich, Hetfield, Burton and Hammett, known to us as Metallica had achieved the first level of their plan. The Creme de la Creme of California’s heaviest and finest musicians under one roof.

Shortly afterwards Metallica were rushed to New York to open for the Rods and Vandenberg, and in just 5 short weeks they became the heroes of the East Coast Metal Movement. They left New York with excellent reviews for their historic show with England’s’ Venom at the Paramount and ended their visit in true “Metallikill” style with some amazing headlining shows.

The band’s debut album “Kill ‘Em All” was released in the UK and Europe by Music For Nations and Megaforce in the US during July ‘83. They followed this release with a coast to coast US tour. 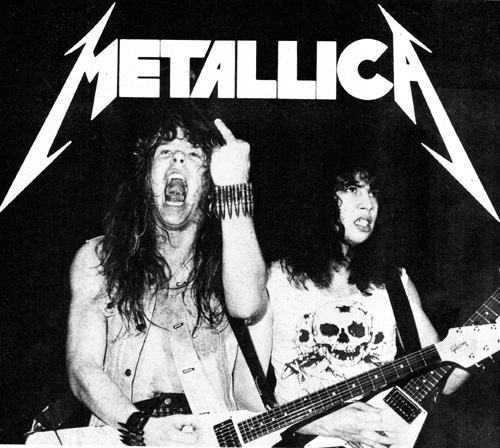 Music For Nations released a 12” single, “Jump ln The Fire” in January l984, this featured live versions of “Seek And Destroy” and “Phantom Lord”. During February they toured Europe as ‘Special Guest’ to Venom. They then visited the U.K. and played two sell-out shows at the Marquee.

In June the band returned to Europe for dates in Holland and Germany, finishing with the Heavy Sound Festival in Poperinge.

In May the band went to Sweet Silence Studios in Denmark to record their long awaited second album ‘Ride The Lightning’. 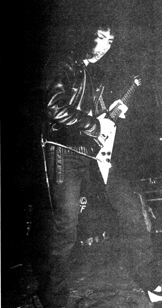 The album was released on July 27th and instantly entered the UK National album chart.

Metallica have recently released their second single ‘Creeping Death’ which features two previously unreleased tracks ‘Blitzkrieg’ and ‘Am I Evil’.