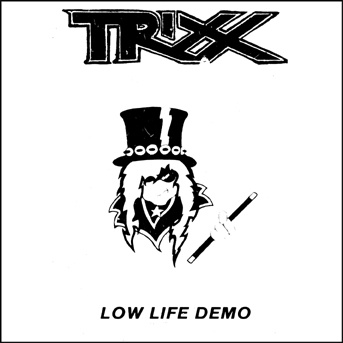 TRIXX – Wimpwire Review
If there’s one tape that stands head and shoulders above a million others lying around my bedroom it’s gotta be an electric three-tracker by Scottish rockers Trixx. Yeah. I know that you’re about to say that any band with two Xs in their name has just gotta be a joke, right? Well pal, I’ve got a surprise for you because Trixx are unquestionably and unbelievably brilliant. Sneaking out of the speakers like a mouth watering, finger lickin’ combination of Dokken, Ratt. Stryper and, golly gosh, TNT, they make the likes of Tigertailz and Cry seem entirely puny by comparison. What’s more, there ain’t a trace of lipstick in sight!

Based in Edinburgh the Trixx line-up stretches to four very talented and, let’s face it, handsome young blokes with a firm finger on how to make yourself look like a rock star without becoming a complete twat in the process. Looking at the photo of the band I’d swear that they’re from Los Angeles and not Edinburgh, and I bet there’s a lot of young female wimp warriors Out there just dying to meet ‘em.

‘The Low life Demo’, as it is titled, kicks off with ‘Love Is A Game’, a sleazy slide through some drastic Joe Perry licks, followed by ‘Low Life’, an evil little creeper that isn’t two million miles removed from Coney Hatch, finishing with ‘Call It Love’, the roughest rocker I’ve heard since Teeze recorded ‘Hot To Trot’. It’s all here, great rifts, superb vocals (by Wes White), efficient arrangements and stupendous energy. I love it!

LISTEN HERE and listen good; it’s time to Cut the crap and face the facts. Some pretty average bands are being hailed as the saviours of British rock and they’re going to be exposed fairly soon. When the axe falls, Trixx won’t be under it.

II you haven’t heard much of Trixx yet you’re sure as hell going to pretty soon. In these parts, they showed the shape of things to come last summer, but those rough and ready early days are of little significance to this rapidly maturing outfit preparing for global assault with Guns blazing n’ Roses between the teeth.

Groomed like a Motley Pussycat, Trixx could almost be Hanoi Rocks without the makeup, David Lee Roth without the outsized tongue in pouting cheek, or Cinderella (without the pumpkin). Take it away guys…

Strong on showmanship, the lights went down a fully 40 minutes before Trixx appeared tonight, with the DJ announcing their imminent arrival again and again. Free from the tease, the eager gathering of fanatical admirers at the front soon whipped themselves into a frenzy (ooh, err!) as the show opened with two huge explosions and ‘This Town Rocks’, as it surely did tonight. ‘Fair Warnin”, ‘WhoYou Gonna Run To’, and a hard hitting ‘Save Me’ led to the unveiling of the completely brilliant newie, ‘Scream City’, a truly blue trip to the roots of rock’nroll, with vocalist Was White amazing even himself. He’s come a long way in a short time.

The further talents of guitarist Terry Lee, bassist Joey S and drummer Russell James Craig were most obvious on the tracks from the demo which soon followed – ‘Love Is A Game’, ‘Call It Love’ and mostly ‘Lowlife’, a song fittingly described as ‘lower than a snake’s belly’.

Maybe one or two fillers crept into the long set, which ended with a double-barrelled encore of the Stones’ ‘Jumpin’ Jack Flash’ and Guns n’ Roses’ ‘It’s So Easy’, and a bit of work on pacing would be useful. Oh, and the experimental acoustic spot – Waysted’s ‘Heaven Tonight’ – went down a storm, despite a nagging feedback problem. Other than these minor details,

Trixx seem to have every flank covered. They sound good, look great and are undoubtedly one of the UK’s few rock hopefuls who are truly convincing. Certainly Scotland’s strongest prospect since Heavy Pettin’ almost cracked it.