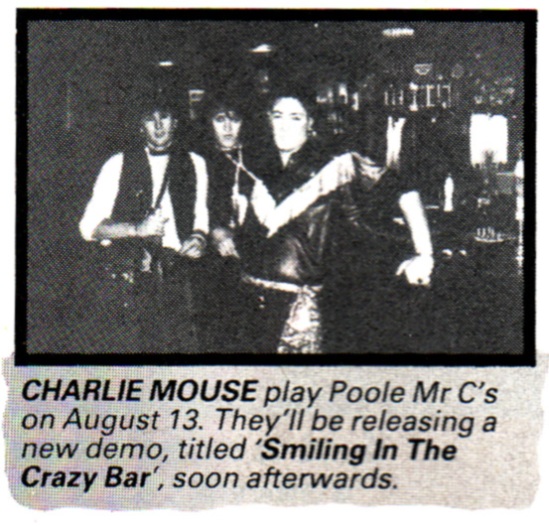 Interestingly enough, when I was compiling this page I did a Google search for Charlie Mouse and found the following post on http://www.sleazeroxx.com

“No we split up, well i left and the others carried on for a bit, then they split up (couldnt survive without me it seems 😉

Anyhow we are all good mates,all living in oxfordshire.

Dave (lead guitarist and Martin (singer) went on to form a very good covers band called The Dirty Earth Band, Dave has since left and still has his finger in the pie promoting local bands, though DEB still is going, they are on the web.

Paul the drummer and the other guitarist Paul(me) chilled out and enjoyed life, but now are writing our own stuff in the vain of The Faces, early stones, Alabama3, blackcrowes, Sheryl Crow sort of vibe. We are doing it for personal enjoyment no heavy stuff or gigging, but will be on myspace and giving away CD’s in the near future…..

PS we are desperate for a decent singer, no intention of gigging just something to do, we have all the gear just need the love child of Chris Robinson, Rod Stewart and sheryl Crow, any takers?

We reformed for a one off gig a couple of years ago and got all our demos remastered onto one CD, also it comes with a live gig at good old Bogies in Cardiff, before it waas flattened for swanky flats, we still have a few left, let me know if you want one..

Have to go now, but wil expand on details info if you want, just saw the post as Paul told me about it the other night