JACK STARR: “Out Of The Darkness” (Music For Nations MFN34) 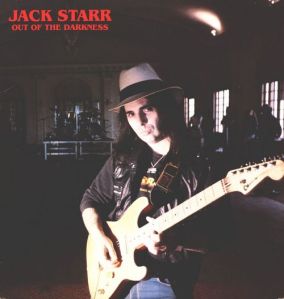 STEPS BACK IN AMAZEMENT! There was I, p155-taking sod that I am, ready ‘n’ willin’ to scoff me socks off at Jack Starr after the ludicrous quotes the Virgin Steele twanger had laid on me in a Covent Garden boozer a while ago, when he puts his plectrum where his mouth is and fires out a splendid solo album.

“I wanna be the first guitarist to go on record saying ‘Eddie Van Halen sucks!” the self-assured yank explained casually.

Laugh? I nearly wet me knickers, and coming face to face with Starr’s solo album just days after being dazzled into an orgasmic frenzy of hero worship by King Edward & co at Donington, I sharpened my pencil in anticipation…

But, lo, ‘Out Of The Darkness’ is a cracker; alive with energy and spirit and stacked high with Starr’s very fine, at times brilliant guitar work. It’s miles better than anything Virgin Steele ever produced and it certainly took me by surprise.

Acquiring the vocal talents of Riot’s Rhett Forrester and the rough ‘n’ tough rivvum readiness of the Rods’ Gary Bordonaro and Carl Canedy, Starr has at last found the band, the material and the inspiration he’s lacked over the past few years. There’s no obtuse HM dumbness here, rather a dextrous display of rock proficiency that owes more to intelligence than diligence,

From the rattling ‘Concrete Warrior’ and the heavy, multi- paced ‘False Messiah’ through an ‘Eruption’-style blitz called ‘Scorcher’ to the punchy panache of ‘Wild ln The Streets’ and the contrasting sensitivity of ‘Can’t Let You Walk Away’, the gang grab your attention and keep it in a half-nelson. What a delight to hear members of three rather ordinary rock bands fusing together like this!

On the flipside there’s the double-barrelled attack of ‘Chains Of Love’and ‘Eyes Of Fire’ along with the soothing, swaying instrumental ‘Odile’ and the jubilant Jack Daniels-swigging, pa-arty-time toon ‘Let’s Get Crazy Again’ where ex-Rainbow tub-tapper Gary Driscoll gets in on the act.

But despite the number of guest performers, it’s JS who’s up front all the way, revelling in the freedom of his own project and gracing the grooves of the best album I’ve heard since Dio’s last waxing.

Jack, despite your hilarious views, you’re a Starr!