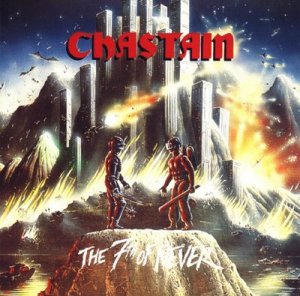 FORGET YOUR Yngwie Dingdong-am-a-Viking diddle-diddle guitar up your arse dramatics; What we got here is magic fingers, ex-strippers, commanding vocals, authoritative playing and Real Songs!

‘The 7th .‘ is David Chastain’s 98th album in two- and-a-half years and by all the rules of the game should be stretched thinner than Stephen Pearcy’s secret-pocketed spandex and just as void of substance; people simply don’t release as many records as this unassuming Cincinnati Guitar Hero does (‘Mystery Of Illusion’ and ‘Ruler Of The Wasteland’ in this particular set-up, ‘Praise The Loud’ and ‘World Gone Mad’ with his other group, CJSS) and still have stuff worth listening to. But, so far anyway, David Chastain has gotten away with it.

CJSS, the more commercial if a touch on the prog-rock side project, is the bread-and-butter stuff, “the wife” as David puts it; while Chastain the group, with its members scattered around the continent, getting together for the occasional musical bash, is “like a mistress to me, I just flirt with it from time to time and please myself with it”. So naturally it’s the one with the most passion, strutting into your brain like a bloody great epic.

Vying with David for the position of Chief Strutter in all this is Leather, the ex-Rude Girl, ex-stripper mentioned earlier, and never was woman more aptly named – vocals that are tough and animal but feel good, especially on the entrail-grabbing ‘Paradise’ and ‘Feel His Magic’.

As for the guitar playing: diverse and confident, from frantic classical flurries to mad Spanish waiter to crazed violin to propulsive sinewy Metal to Turkish bazaar mayhem to avant-new wave on the fine ‘Forevermore’.

This is an imaginative, heavy and commanding Guitar Hero album.