BATHORY: “Bathory” (Under One Flag FLAG 8)

This baby’s got the works.

‘Raise The Dead’ was the cut that first turned me onto Bathory, and here it is in -all its atmospheric glory. Building from a passé church bell intro laced with a heavy heavy heavy throbbing heartbeat sound that’ll separate the Goodmans from the Amstrads into a claustrophobic riff that’ll curl yet toes and shatter yer spine.

But ’Raise The Dead’ isn’t the only ace clutched in Quorthon’s grubby mitts. ‘Hades’, with its five minute intro (now a Bathory hallmark), is a vital helping of Thrash that wields a bread-knife to deadly effect, ‘Sacrifice’ (originally on the ‘Scandinavian Metal Attack’ compilation album) bites with a similar fury and ‘In Conspiracy With Satan’ (spelling was never Quorthon’s strongest point!) effectively bludgeons the senses until the stars form before your eyes.
PAUL MILLER 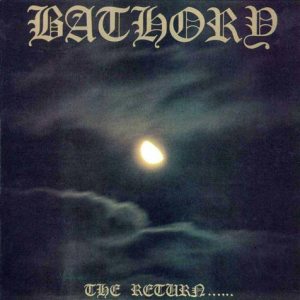 ‘The Return..’ (I always like to save the best ‘til last) and.. well, it’s easy to see that mainman Quorthon’s claim to have been completely ‘ inebriated all through the recording of this album is true.

Although it’s probably the heaviest thing ever committed to vinyl, it’s also the muddiest, dirtiest and most turgidly inane. Endless repetition of rifts piled haphazardly on each other whilst Quorthon brays his familiar ‘senile Dalek’ vocals and overlays the most out-of-place solos it’s ever been my misfortune to hear.