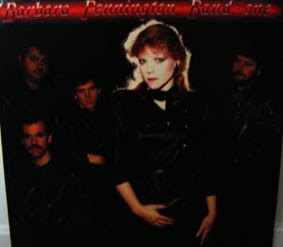 IT’S TAKEN a while but former ‘Armed And Ready’ starlet Barbara Pennington has finally emerged vinyl handed from her Houston base.

The album’s co-produced by guitarist Jeff Wells’ and Point Blank’s Rusty Burns, which makes it rather ironic that the guitar is the album’s one major weak point, totally underdone, when so much more could have been achieved given a ballsier, punchier approach. The synths of Danny Deluxe and/or (depending on the track in question) Steven Cooper are deliciously colourful and seductive however, spiralling melodic overtones to a succession of pop/Metal tunes rather reminiscent of early Toronto.

As vocalist and co-writer (with Jeff Wells) of most of the material, Barbara takes a deal of the weight herself and emerges with credit in both departments. Given a tougher production this could have been an outstanding

record but it is a good one nevertheless, veering from the throwaway fun of ’He’s So Fred’ through the perky ‘Don’t Take My Heart’ to the more powerful –

‘Catch You Later’, with every hook sinking in just like pop/ Metal hooks should.