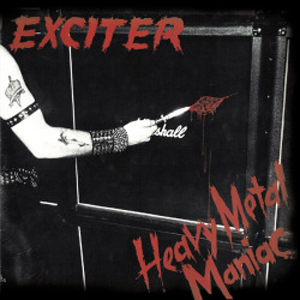 What this trio is about is the production of hack ‘n’’ slash, dumbo, limb-tearing metal. Nothing subtle, nothing fashionable – just turn it ON, turn if UP, and get wasted in the gutter.

From ‘The Holocaust’ to ‘Iron Dogs’, and ‘Raising Of The Dead’ to ‘Cry Of The Banshee’, Exciter race along on the back of a tank-tread bludgeon. And they do it so well, an’ alI. The bass/drums/guitars of Allan Johnson, Dan Beehler, and John Ricci respectively fuse together in a manner so redolent of Anvil, without the tenderness of the latter! Yes, folks, if you put this onto the turntable, prepare to be blurred into submission.
So, is this a goodie worth shelling out some hard-earnt shekels for? Well, let me put it this way. If you’re expecting a well-produced, highly crafted piece of plastic, then look elsewhere. However, if you are the sort who can accept a fuzzy sound, and Black & Decker number quality, then you’ll find ‘HM Maniac’ a definite bargain. 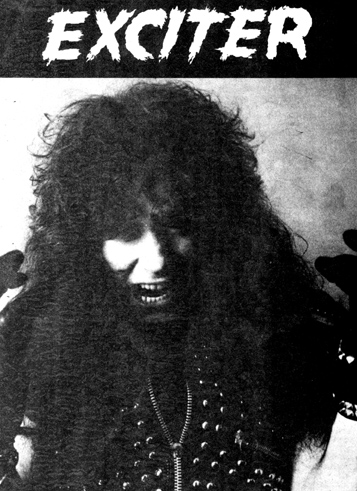 Exciter’s first album entitled ‘Heavy Metal Maniac” was released in America during 1983, and was available in the U.K. on import only. Even so, the album managed to cause quite a stir in the Heavy Metal market and was one of the best selling import albums of the year

The band signed to Music For Nations at the end of ’83, for the UK and Europe, and their first MFN release was their second album entitled Violence and Force’, released on February 17th.

In March ’84 Exciter made a promo visit to the UK which included a London show.

The band are currently (Nov ’84) on an extremely successful USA tour as guest to Mercyful Fate and Motorhead. Once back home in Canada, Exciter will be concentrating on a new album to be recorded early in 1985 probably in the UK. This album will be on Music For Nations worldwide.

DAN BEEHLER – Drums, Lead Vocals. Dan is the drumming force behind Exciter. From his aggressive vocals to his double-bass drive, he creates an atmosphere of total control at every concert, He has been drumming for a total of seven years now and has developed a style much to be desired by many a metal pounder.

ALLAN JOHNSON – Bass, Backing Vocals. Allan is the quiet member of Exciter, but onstage is one of the few aggressive bass players in the metal field today He’s been pounding bass and writing material for eight years now, six of which have been with Dan. When it comes to tightness and the bottom end of Exciter, Allan is a vital element.