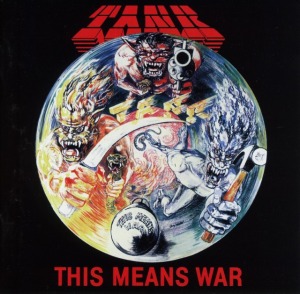 The addition of ex-White Spirit guitarist Mick Tucker for this third album has made a mountain of difference seemingly. The sleeve credits are oblique to say the least but if he was hired by Spirit to do the some as Gers had done, then he must also be responsible for the
Blackmore-esque work etched into this and most of the other tracks.

Second cut ‘Hot Lead Cold Steel’ is just as heavy as the opener and with the title track following hard on its heels the first side really leaves you breathless, When the dust settles, flip it over and the riotous ‘Laughing In The Face Of Death’ will rattle out. It’s clear come this stage though that ‘T.M.W.’ is NOT going to “fill the gap after Rainbow Rising” as Algy Ward threatened. Mainly because his is not the strongest voice in the world and John Verity’s production doesn’t flatter it. Then a couple of weaker numbers let it down a bit more. ‘(If We Go) We Go Down Fighting’ flounders on a pretty crass football-terrace chorus/chant and ‘I (Wont Ever Let You Down)’ doesn’t work too well because it seems just a shade too deliberately ‘poppy’.

Fortunately though it picks up again for the closer ‘Echoes of a Distant Battle’ and in the end there’s no escaping the effectiveness of Tank’s attack – however brutal and crude it may be. I can’t condone the Falklands inspired military theme that runs throughout the lyrics – people getting killed is not something that should be treated so flippantly – but the music stands up on its own. Tank have made a new start as a four-piece that should see any previous ‘Motorhead-clones’ jibes evaporate away. And in the process they’ve also managed to come up with some fine, convincing rough’n’ready rock. 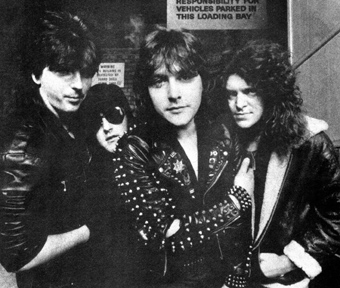 Tank were formed in 1980, when their line-up consisted of Pete Brabbs on guitar his brother Mark on drums and vocalist/bass player Algy Ward (formerly of The Damned).

During the next two years the band toured consistently opening for acts like Motorhead, Girlschool and Diamond Head, as well as headlining their own shows. During this period the band released two much acclaimed albums, ‘Fifth Hounds Of Hades’ and Power Of The Hunter’. Both albums were Top 50 hits in the UK and brought with them a large and loyal following for the band.

In early 1983 Tank decided to broaden their horizons, by changing their line-up and their record company They were joined on guitar by Mick Tucker from White Spirit, and shortly afterwards signed to Music For Nations.

They immediately went into the studio to record their third album, ‘This Means War. The album was produced by John Verity who’s best known for his work with Saxon and Argent. 1983 saw the departure of Mark and Pete Brabbs and this meant another recruitment period had to take place. Finding the right people for Tank was not to be an easy task. However, once again an ex-White Spirit member, Krall, was drafted into the ranks as drummer, for the new album. This worked so well that he has remained with the band, along with new guitarist Cliff Evans, who’s previous bands included Chicken Shack, Head First and up until the time of working with Tank, Cliff worked as a session player.

With the line-up now complete and generally considered to be the best combination to date, the band completed work on their new album ‘Honour and Blood’, which was released on November 16th. Tank are currently on a European tour as special guests to Metallica.