WITH a name like Panza Division this five-piece from Sheffield are likely to come in for some unjustified political flak. Neo-Nazi Heavy Metallers? But the band deny any political connection and the name in fact is taken from one of their songs at the suggestion of mentor and Radio Hallam DJ Colin Slade.

Indeed Slade has been responsible for much of the band’s success persuading guitarists/vocalists Glenn Marples and Rick Corcoran to compose the theme tune for his programme on commercial radio and producing their single ‘We’ll Rock The World’ b/w ‘Standing On The Outside’ available from Bullet Records. 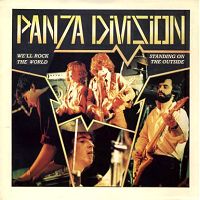