IF THERE’S one thing I truly detest, it’s when an audience stands back, sneers at a band and seems to say, “C’mon then, impress us.”

Surprising, as it may seem, this is not something exclusive to Britain’s blasé, gig-saturated capital. No, you even find it in the supposedly warm and receptive northeast – and it’s the kind of situation that Black Axe have to endure at the Sunderland Mayfair this Friday night.
A snooty attitude is apparently pretty prevalent at this particular venue – so dramatically different in atmosphere to its nearby Newcastle namesake. In the past punters have pulled such tiresome stunts as sitting on the edge of the stage with their backs to wards the performing group.

And although nothing as extreme as this happens during the Black Axe show, for every committed headbanger on the brightly-lit dancefloor down front you feel there’s a hundred derisive smiles hidden in the surrounding darkness. 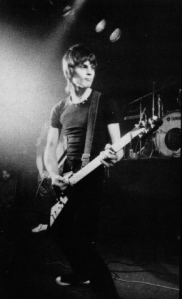 Why do it? It’s a mystery

For even though the Black Axe show is always good, occasionally brilliant, the Mayfair miseries refuse to be moved.

Mind you, they were animated enough during the pre-gig HM disco – despite the feeble volume and the presence of hoary heavies of the ‘Whole Lotta Love’ ilk, they still shook their matted mops and idiot danced like the best of ’em.

But as soon as the band took to the boards the crowd dispersed, the atmosphere died and it was like being at a mid-table match on the last Saturday of the football season.
A terminal time-warp? Seems to me that these kids would rather stay with the old faves than try anything new, exciting or different. A theory that’s borne out when it’s mentioned later that the only club that does well in this club is White Spirit, and then only when they start to play Deep Purple covers..

This stick-in-the mud disease infests the Heavy Metal world and we must find a cure!

Are Black Axe that antidote? I’d like to think so. Formed 4 years ago at school by vocalist Chris English and guitarist Simon Sparkes, this Carlisle-based band caused quite a stir recently, in a rock show radio session stylee.

Tommy Vance on Radio One and Alan Freeman on London’s Capital Radio have both given the Axe enthusiastic airings and you may remember the songs ‘Head Contact (Rock’n’Roll)’, ‘Edge Of The World’ and ‘Lazer Blind’. You may even have their double A-sided single ‘Highway Rider’ / ‘Red Lights’, released last year on the inventively titled Metal record label (catalogue number: MELT 1)

Black Axe are that rare creature, an HM/HR band with an original sound. Their songs are more UFO than Motorhead, but that’s where the name-dropping ends and their own unique identity takes over. With inventive riffs, songs with potential to make commercial coup de grace and the most promising new vocalist I’ve seen since Diamond Head’s Sean Harris, Black Axe are aiming straight for the chop – er, top.

And, given the breaks, they’ll hit target dead centre.

Because Black Axe aren’t due onstage much before midnight and I need my beauty sleep, we elect to hold the interview in the dressing room before the show. So say hello to Messrs English and Sparkes as well as stocky Bill Keir (rhythm guitar / keyboards), towering bassist Stewart Richardson and bespectacled Mike Thorburn (drums)

First topic of conversation is the aforementioned showcases for the airwaves.
“Obviously they’ve done us a lot of good,” says Sparkes.

“They’ve got our names around and given out music exposure to a vast amount of people, more than we could ever hope to reach through gigs alone.”

Especially if they remain as infrequent as they are at the moment. For since the release of their first single in autumn 1980, Black Axe have played the grand total of precisely 4 shows.
“It’s a lot to do with making ends meet,” reveals English. “We can’t afford to lose too much money and hiring PA’s and lighting rigs is incredibly expensive.”

“Anyway,” chips in Keir, “it’s pointless to keep doing the rounds if you haven’t got anything to back you up, any definite objective to work towards. I reckon if we’d been on the road solidly for the last six months it wouldn’t have helped us any, we wouldn’t be any further ahead than we are now. We spent out time much more profitably keeping a low profile and just rehearsing and writing.”

“We’ve been waiting for the right time to start pushing,” says Richardson, “and that time is now. It’s all coming together – you’ve heard us on the radio, now see the band!”
I make the point that Black Axe isn’t really the most original of HM band names. The group tends to agree, but point out that it’s infinitely preferable to their original mouthful of a moniker, Leviathan.

“No one could pronounce it!” says Thorburn.

Some people used to call us Levitation . . . nobody’d ever manage to get it right,” moans Sparkes.

“Besides” says Keir, “if you’re called levitation you could be any sort of group. It’s hard to find a name people can remember. We chose the name Black Axe because it’s self-explanatory, everyone knows straight away that we’ve got to be a Heavy Metal band.”

Sparkes picks up an Keir’s comments: “Thing is though Bill, we don’t really play Heavy Metal do we? And speaking personally, I wouldn’t like us to be labelled an HM. I’d say we were more 200mph heavy rock, and more influenced by American bands than British bands.”
“Yeah, the phrase Heavy Metal does tend to get everyone’s backs up,” agrees Thorburn. “Everybody’s searching for a new name for it. Judas Priest tried British Steel, More are calling their music Atomic Rock – and we’ve got our own category too, Head Contact Rock’n’Roll, like in the song title, I think that description’s perfect.”

.
It’s a strange but true fact that, although the so called New Wave Of British Heavy Metal is assumed by most to be in decline, there are more good bands around now than there ever were when the whole thing was supposedly at its height.
Sparkes concurs and adds, “I think that it’s better that we’re beginning now, rather than in those crazy days when Neil Kay and the whole Bandwagon thing was happening. The only problem is that now the record companies seem to have found their quota of HM bands and don’t seem willing to sign any more. It’s a pity, because as you say, there are better bands around now than there were then.”
“Yeah, you’re right, the companies do seem to be consciously ignoring the new groups,” comments Richardson, but adding confidently, “however if you’re good enough you’ll pull through in the end.”
Only one of Black Axe has a day job – and he’s about to be made redundant – so the band’s very much a full-time commitment for all the members.”We’ve been through a lot together,” says English, “and if we manage to achieve success we’ll treasure it because we’ve worked so hard for it.”
“But it isn’t easy,” says Thorburn. “Our manager Frank Stewart-Brown (original Def Leppard mentor) has a saying that he once noticed hanging on the wall of a Phonogram office; “On the plains of hesitation lie the bones of countless millions who have stopped to view their success and, while resting, died”….”
After a fire outside the venue, the band finally take the stage in the early hours of the morning, but despite the threat of the club burning down the crowd remain cooler than an Alaskan nudist colony.
Black Axe fight on regardless and put on an impressive, 90 percent original display. Biggest plus points are the stage presences of founder members Chris English and Simon Sparkes. Vocalist English is slight, blond and has definite jeans-creaming potential. His voice is high and harmonious, perfectly complementing the band’s melodic songs.
And guitarist Sparkes is an odd one. Tall, dark and gaunt, he looks like the Stranglers Jean Jacques Burnel and possesses a peculiar friendly – but menacing persona. His playing is fluid, effortlessly accomplished and provides an intriguing contrast to Bill Keir’s workmanlike actions.
Meanwhile Richardson betrays his funk afflictions by laying down an almost disco beat, and Mike Thorburn is a passionate powerhouse on the drums.
Combination of the five is sheer dynamite. 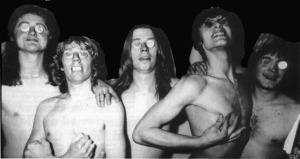 But the Sunderland Mayfair audience was, of course, as unenthusiastic as I was over the moon.
I wonder who’ll be proved right in the end?