“Bitches sin: this excellently named combo were formed a year ago, culling members from a variety of bands based in the Barrow-in-Furness area. Viz and to wit Alan Cockburn (vocals), Ian and Pete Toomey (guitars), Pez (bass) and Bill Knowles drums. 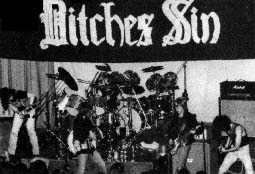 A demo tape gained exposure on Piccadilly radio and in January of this year Bitches Sin recorded a single for release on neat records, “always ready”. They’re also included on the neat compilation cassette “Lead Weight”.

BITCHES SIN!! Aaaargh! Kerrang! That name – it’s so heavy. They’ve just gotta be good. One problem – they aren’t. In fact, Bitches Sin are useless, garbage material. They can’t play, they can’t sing, they can’t produce and they sure as Hell can’t ,write a good song.

I’ve heard the likes of ‘Runaway’ (yawn) ‘Looser’ (snore) and ‘Riding High’ (oh, the tedium) a hundred, nay a thousand times before and I’ve never been turned on to them. It’s the same old beats, the same old ideas. God, It was hard to sit through this album, but I managed to and deserve a medal for it. If this is what Heavy Metal’s all about, then I’m a futurist!

‘Fallen Star’ is average for its harmony guitar, but that’s the best I can do for you lads. Ain’t life a bitch!

“Bitchin’ hour”
“Bitches sin are useless garbage material. They can’t play, they can’t sing, they can’t produce, and they sure as hell can’t write a good song” (Howard Johnson – Kerrang! Issue 20 – see above).

It’s often been said that for an unknown band, a good review/feature in Kerrang! Can be of enormous benefit. So, I suppose, the opposite is true as well. Certainly after writing the above “obituary” on the “Predator” album last year, Howard “quiche” Johnson won’t find himself heading bitches sin’s Christmas card list. More likely, he’s a hot candidate to have a painful prodder stuck up his nether orifice.

“I can’t say that review did us any good, ‘cos it wasn’t so much a fair review as an out-and-out slagging.” Barnstormed sin guitarist/spokesperson Ian Toomey on a frosty line from the band’s Cumbrian base recently. “What he said was silly. There were musical passages on the album, so to say we can’t play was just plain silly.

Basically, we had lots of reviews at the time the album came out from fanzines and major magazines, and most of ’em thought it was pretty good. Indeed we got a four star review in sounds the week before Howard’s thing appeared, and the guy who did that thought our LP was better than both the Fist and Raven ones which came out at the same time! So I think overall Kerrang! Was out of step with the majority.”

Well were we? Certainly, the consensus of opinion amongst those who have heard ‘Predator” is none too complimentary, which leads me to suggest that whatever the quality of this band (of which more soon), their first album was a musical embarrassment. Indeed Toomey himself seemed almost to concede the point.”

“It wasn’t a good representation of what the band is all about. For me, maybe three songs on the worked out well. But, what you’ve got to remember is that we worked like blue-arsed flies to get it finished, doing 10 tracks in five days.
“We also had a problem cutting the album. When we heard the master tapes, it sounded quite good. But none of the band were able to be present when it was finally cut, and something went wrong there. If you play the album on a good stereo system, you’ll notice that the lower end has practically disappeared.”

Excuses apart, it has to be said that Bitches Sin lost a tremendous amount of ‘oomph’ when they switched labels about a year or so back from neat to heavy metal records. Now, whilst with the neatos, Bitches Sin did come across like a third division band with the potential at least to gain promotion to the second division. If you doubt me, hunt down their single “always ready/sign of the times”, or better still check out “down the road” on the neat “leadweight” cassette compilation of 1981. What this trio of cuts proves is that Bitches Sin do possess more imagination/appreciation of melody than most bans. So what’s gone wrong since the band became members of the HMR roster?

“I think the reason our recent stuff hasn’t sounded so good is due to the difference between Neat and Heavy Metal Records,” answered Toomey. “Paul Birch, who runs HMR is a good businessman and highly ambitious. He pushes bands to the limit, and certainly knows how to promote ’em. Our album got tremendous advertising back up. In this respect he’s got the edge on neat. But, on the recording front, it’s Neat who come out better. They’ve got their own studios and can afford to give a band almost limitless time to get a proper sound, whereas with Heavy Metal, everything is much more ‘rush, rush’. I think this comes through in the final product.”

However, whether or not bitches sin will get a chance to utilise HMR records expertise in the area of promotion remains open to real doubt at the moment.

“The official word from them is that ‘the situation is very much up in the air’. We are going to be doing some new demos very soon, possibly in Neat’s impulse studios, and the label want to hear them before committing themselves to any new deal. But we aren’t gonna bank on heavy metal taking up a second album – we’re also talking to other companies such as neat and bullet”
In the meantime, as Bitches Sin await the vinyl verdict, they’ll be taking to the road for a series of March/April club and college headlining gigs.

“We aim to show the public that we aren’t as bad as Howard Johnson suggested. In fact, it’s on-stage that we really excel, and Bitches Sin can blow most bands off any time.”

This, is in fact, will be the first opportunity for most punters to gain sight’n’sounding of the new sin line up: Ian Toomey and his brother Pete (guitars); Frank Quegan (vocals); Bill Knowles (drums); Mike Frazer (bass). Is it perhaps significant that only the thrashin’ Toomeys remain from the line-up that recorded “predator”?
“Well I think right now, bitches sin has the sort of line-up we’ve always needed. Frank Quegan has a great voice, just like Ian Gillan, and he fits so well into the band. And I’m really glad Bill has rejoined us after a short spell away. He was also responsible for bringing Mike Frazer to our attention.

“Our attitude at the moment is one of determination. We are gonna have a real go at getting through to people!”
Three years after their formation, bitches sin may be in a rut partially of their own making. But I don’t think we’ve heard the last of ’em.

No More Chances – 7″ Review 1983
The sleeve notes on this 12″ go to great lengths to let us know who played which solo on which song. Probably because the solos are so forgettable the band themselves are in danger of not knowing who was responsible.

C’mon lads, forget the solos until you have some good songs and backing tracks to put them on.